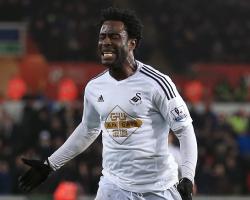 But it is also understood that City's initial approach - made since the weekend - has not included them tabling an offer for the Ivory Coast international.

The Welsh club's record signing joined Swansea from Dutch side Vitesse Arnhem in 2013 for just under ÃÂ£14million.

It is thought that if any deal materialises during the January transfer window, then it could be for up to twice that amount.

Bony, 26, agreed fresh Swansea terms in November, penning a one-year contract extension to keep him at the Liberty Stadium until June 2018.

Any move for Bony would be complicated by the fact City currently have no more room to register non-homegrown players in their squad.

Speaking during a press conference on New Year's Eve, Pellegrini said: "I think that is just one of the 20 or 30 names I have read from the beginning of the season until today that we are (supposedly) interested in.

"'I don't think we are going to be too busy in this window.

"We have restrictions about the amount of money and about the number of players we can put in the Champions League, so I don't think it will be a special transfer window for our team."