Bony insists he is happy at City 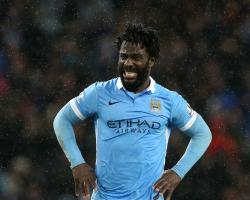 In December the 27-year-old publicly questioned City boss Manuel Pellegrini's decision to demote him to the bench for a 2-1 loss to Arsenal and start the fit-again Sergio Aguero, despite Bony having scored three times in the previous four games.

He has recently been linked with Swansea, the club he left to sign for City last January.

But Bony told BBC World Football: "I'm happy at the club, all this speculation is not true.

"I have a contract so I'm happy and I think I'm at one of the top clubs in the United Kingdom."

Twelve months on from his move to the Etihad Stadium on a four-and-a-half-year deal, Bony has made only 11 Barclays Premier League starts for City so far.

But the Ivory Coast international added: "I have no regrets about joining Man City.

"We play in the Champions League and we're one of the top clubs in the world. I'm happy here and I can just say I'm blessed."