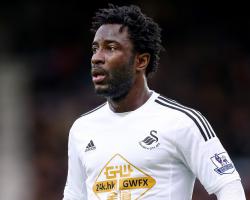 Bony completed his transfer from Swansea to City last week for a fee which could rise to ÃÂ£28million but he will not be able to play for his new club until he comes back from the African Nations Cup.

The Ivory Coast forward revealed in an interview with Sky Sports News that he resisted the advances of other clubs as he wanted to play in the Champions League.

The Blues are expected to include Bony in their European squad so he can feature in the second-round clash against Barcelona next month.

Throughout Bony's career he has enviously watched the top teams in Europe contest the Champions League and he is now desperate to get in on the act too.

"The Champions League is a competition I haven't played in yet

I really want to feel it and enjoy it," Bony said

"I want to be in the action, not watching it on TV.

"It's good motivation for me."

Bony's prolific return of 20 goals in 2014 made him an obvious target for City, who allowed Alvaro Negredo to move to Valencia last summer.

Bony hinted other teams were interested in him, but he says he only had eyes for City.

"I think so," Bony said when asked if City was the only offer he considered.

"I don't know if I should have chosen the other one

I think this is the best club for me."

If Bony harboured any doubts about moving to the Etihad Stadium, they were quickly erased by manager Manuel Pellegrini, who told the striker he would have an important role at the Premier League champions.

Bony added: "He [Pellegrini] talked to me [and said] 'I really need you here, you will be part of our project

I think you will enjoy here'."

The need for Bony's finishing ability and pace was clear on Sunday when City lost 2-0 to Arsenal.

Sergio Aguero failed to sparkle on his return from injury and neither Stevan Jovetic nor Edin Dzeko could make an impact off the bench as the Blues slipped five points behind Barclays Premier League leaders Chelsea.

City headed to Abu Dhabi after the game for a five-day warm-weather training camp.

Jesus Navas hopes the trip will help the squad forget the defeat and concentrate their minds ahead of Saturday's FA Cup match against Middlesborough and the huge top-of-the-table clash against Chelsea that follows the week after.

"It's always good (to get away)," the Spaniard told City TV.

"We know how crucial that game will be

We will have to give our best and be 100 per cent focused."

City will play Hamburg in a friendly on Wednesday and return to England two days later.

The club, meanwhile, confirmed on Monday that Seko Fofana's loan deal with Fulham has been extended until the end of the season.