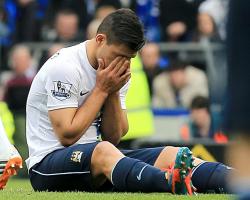 Argentina international Aguero, who has been plagued by injuries in the second half of the season, limped out of Saturday's victory at Everton with a groin problem.

City can move two points clear at the top of the Barclays Premier League with just one game to play if they beat Villa at the Etihad Stadium.

Pellegrini said: "He couldn't recover 100 per cent from his groin problem, so he is not in the squad list."

Aguero, who scored his 28th goal of the campaign before leaving the field in the 3-2 win at Goodison Park, has missed 18 of City's last 31 games with various leg muscle injuries.

The 25-year-old, however, has not yet been ruled out of Sunday's season finale at home to West Ham.

Pellegrini said: "Maybe he can have some chances, we will see the way he improves during the week.

"It was not 100 per cent sure if he was completely fit for tomorrow, that is why I didn't want to have a risk with him, but we will see during the week if he can play on Sunday."

Pellegrini does not accept the claim of his Liverpool counterpart Brendan Rodgers that the title race is effectively over and settled in City's favour.

Liverpool squandered the chance to apply considerable pressure to favourites City as they surrendered a 3-0 lead to draw 3-3 at Crystal Palace on Monday night.

The result still took the Reds to the top of the table, but the initiative, because of their game in hand, is now with City.

I only know we have two games and we have to win the game against Aston Villa.

"At the end of the week we will see which team has more points."

Pellegrini, speaking at a press conference to preview the visit of Villa, claimed he did not watch Liverpool's dramatic late capitulation against Palace when they conceded three times in the last 11 minutes.

When asked about the result, the Chilean said: "I feel it is just one result more in the Premier League.

"In the Premier League it is very difficult to win the games.

"You cannot be sure you are winning until the end, until the last minute."