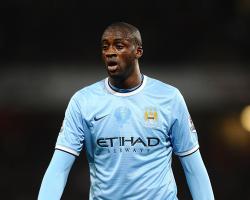 He also attracted some ridicule by claiming the player's chief complaint was a lack of acknowledgement of his 31st birthday during last week's post-season tour of Abu Dhabi.

The club also tweeted a birthday message at the time.

Seluk responded by attempting to clarify his remarks, insisting that those measures did not go far enough.

"He got a cake but when it was Roberto Carlos' birthday, the president of Anzhi (Makhachkala) gave him a Bugatti," he said in one of his more remarkable comments in a BBC interview, although he did add he did not expect City to give Toure a car.

Toure then weighed in and appeared to put an end to the matter as he joked about the birthday comments and then underlined his commitment to City.

The Ivory Coast international tweeted: "Please do not take words that do not come out of MY mouth seriously

Judge my commitment to @MCFC by my performances."

But around an hour later, Toure appeared to perform a volte-face, changing his position and endorsing that of Seluk.

He tweeted: "Everything dimitry said is true

He speaks for me

I will give an interview after world cup to explain."

Seluk then took to the airwaves again to reiterate his earlier statements.

He insisted the birthday issue remained a bone of contention, claiming that nobody in a senior position at City had wished Toure many happy returns.

"This happened on May 13," Seluk told Sky Sports News

"Until now nobody from staff called Yaya and said sorry

It was really was not right

It is not a little bit correct.

"If they don't want Yaya, no problem

We can leave any moment, without any problem."

City have not commented and with Toure having only signed a four-year contract last season, their position is one of strength.

Seluk also has a history of threatening his client's exit, having done so in each of the past two seasons and also during his time at Barcelona.

In fact last year Seluk demanded Toure's latest contract discussions be concluded by a certain deadline, only for that date to pass and Toure - with little apparent complaint - to sign a month later.

Seluk, however, insisted he was not trying to engineer talks over another new contract.

He said in The Sun: "He's very upset and he started thinking of leaving the club

For Yaya what is the most important thing is human relationships."

He later added: "It is an important human relationship to shake hands and say 'happy birthday' but nobody did it to Yaya

It shows they don't care about him."

Seluk went on to suggest in one of his later interviews that Toure's initial tweets did not come from the player himself.

Seluk said: "After that he said 'what Dimitry said is true'

Before that was not really from Yaya..

After that Yaya put what he wanted and not what he asked persons to do."

He insisted the threat for Toure to leave was genuine and the player felt so seriously about it he would take a pay cut to be appreciated more.

Seluk said: "Getting clubs interested in Yaya is not a problem

For Yaya to find a job there is no question.

All club must respect players who work for this club.

"We've not asked any money, we don't ask any presents

We're only talking about attention

For example, Yaya agrees (he would want to play) for less money but with more attention."

Asked if Toure would still be a City player at the start of next season, Seluk said: "I don't know

Yaya will also speak personally with staff and I hope after that he will make a decision."

He added four more in other competitions, including a spectacular strike in the Capital One Cup final win.