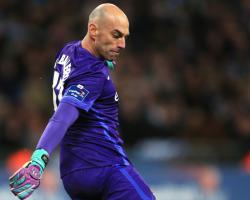 Caballero, City's second-choice goalkeeper, was forced into action after England number one Hart suffered a calf injury in Sunday's costly 1-0 derby defeat to Manchester United at the Etihad Stadium.

It was the Argentinian's first taste of action since his penalty shoot-out heroics in the Capital One Cup final last month and, with Hart potentially out for up to four weeks, there is likely to be more.

The 34-year-old, signed from manager Manuel Pellegrini's former club Malaga two years ago, said: "When I came here I knew what was going to be my situation.

"But I came to play, so if I have the opportunity I try to take it and keep it

I try to do my best

I had opportunities in the cup and I have been training really well, so I think I am ready."

Despite Caballero's confidence, Hart's absence over the next month, as City battle to hang onto fourth position in the Barclays Premier League and face Paris St Germain in the Champions League quarter-finals, is another serious blow for the club.

The 28-year-old has been a consistent performer throughout a patchy campaign for the team and Caballero knows he will be missed.

He said: "I hope he recovers soon

It is really important to be fit soon."

City also lost forward Raheem Sterling to a groin injury early in the game while United's victory lifted them within a point of their neighbours, and alongside West Ham, in what is now a tight battle for fourth.

United teenager Marcus Rashford scored the only goal after 16 minutes, beating error-prone defender Martin Demichelis all ends up in the process.

Demichelis, 35, endured a torrid time as he returned to the starting line-up because of injuries to Vincent Kompany and Nicolas Otamendi

He was hauled off by Pellegrini after 53 tortuous minutes.

The only positives City could cling to were the second-half rally which provided a number of chances for Sergio Aguero - whose closest effort was a header against the post - and the fact they can now regroup during an international break.

Hart and Sterling are likely to join Kompany on the sidelines for the next month but the recess could at least allow Kevin De Bruyne, Samir Nasri and Fabian Delph to step up their recoveries via friendly matches.

Caballero said: "We are disappointed because we played well in the second half

We had a lot of situations but we couldn't equalise, so it is a really sad weekend, and also for the injuries

It is really hard to lose one or two players again.

We need to try to focus in our team, in our way to play to get results and I think the only way to do it is as in the second half."