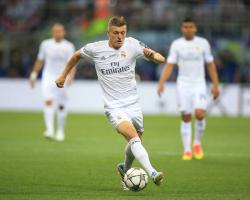 Manchester City have made a tentative start under Pep Guardiola, going down to a 1-0 defeat to Bayern Munich in a friendly where both sides were a long way short of a full squad with players missing due to Euro 2016 and Copa America exertions

That could be set to change with Pep looking at bringing in a player that definitely suits his football philosophy.

Ball possession is one of the central pillars of the Guardiola success story although some may claim that Manchester City will be a much bigger challenge than Barca or Bayern Munich where he inherited world beating clubs.

If at Bayern Munich he was ÃâcomfortableÃâ then City and the Premier League will give him the grit and challenge he is looking for along with the finances to realise his targets.

At his first English press conference the 45-year-old Spaniard revealed why he chose to manager Man City and should we expect a tiki-taka style of play : "It's a target for me

I'm here to prove myself and prove I can play [the same way]."

The 26-year-old German midfielder has a huge fan in Guardiola who will be looking for a world-class playmaker to keep things ticking over in midfield and have according to the Mirror launched a ÃÂ£50million bid to bring the player to the Etihad.

At his fan presentation he stated how Real Madrid is the "biggest club in the World" and is a "cut above Bayern."

City are set to travel to China with a squad closer to full strength where they are due to face Manchester United on Monday.