​Manchester City went five points clear at the top of the Premier League after a hard-fought win at Watford on Tuesday evening.

Goals either side of half-time from the in-form Leroy Sané and Riyad Mahrez helped the visitors open up the gap to second placed Liverpool, who play Burnley on Wednesday night. 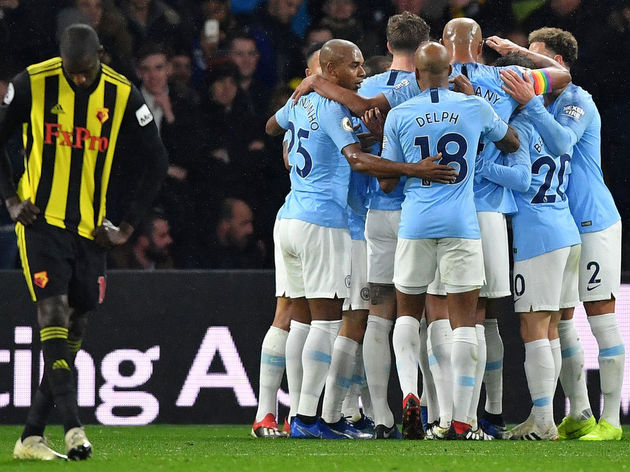 A goal from Abdoulaye Doucouré ensured a nervy finish, with Troy Deeney's leaping header producing a save from City keeper Ederson in the closing moments.

Mahrez then doubled his side's lead shortly after the restart with a composed side-footed finish. Although ​City bossed the opening period, it was ​Watford who had the game's first chance, when Roberto Pereyra's strike flashed wide of the right-hand post.

The visitors almost went in front moments later, but Sané was superbly denied by Hornets goalkeeper Ben Foster, who made a number of outstanding saves to frustrate City for much of the first half. Watford did not create much in front of goal. Their best chance of the first half fell to Troy Deeney, but his shot on the half-volley was denied in superb fashion by Ederson. Despite a late scare after Doucouré's goal, City ran out deserved winners.

Check out our breakdown of the game below

Defeat against Manchester City means the Hornets have taken just one point and scored one goal in their last five Premier League games. It is nowhere near a crisis for Javi Gracia and his players, though there will cause for concern around Vicarage Road.

Watford, who started the 2018/19 season with four wins in their first four games, have now only won two of their last 11 Premier League matches.

STAR MAN - Ben Foster produced an inspired performance in goal for Watford, making a string of impressive saves, particularly in the first half. The scoreline does not do justice for the former Manchester United keeper's performance, as Pep Guardiola's side could have been out of sight by the break.

It was exactly the kind of performance required by the Hornets shot-stopper to prevent it turning into a cricket score against a City side that has been scoring for fun in recent weeks.

WORST PLAYER - Although Watford were competitive and spirited in their approach, they lacked the quality to ever seriously threaten Manchester City until the dying seconds. 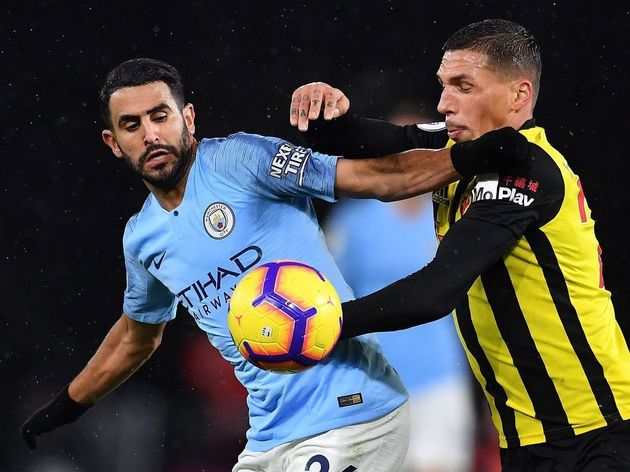 José Holebas did not have a memorable evening up against the teasing trickery of Riyad Mahrez. Mahrez frequently got the better of Watford's Greek full back, posing a constant threat when cutting inside onto his left foot.

It was a tricky test for Pep Guardiola's men but, like against Bournemouth, City had an abundance of quality that shone through for most of the contest.

Victory for the current Premier League leaders means that they extend their lead at the top of the Premier League to five points, with closest challengers ​Liverpool travelling to Turf Moor to play Burnley on Wednesday. If there is one cause for concern in Pep Guardiola's mind, it is that City did not manage to break the deadlock until just before half-time. However, that was thanks to a brilliant string of saves from Foster rather than wasteful finishing from City.

STAR MAN - On his return to the starting XI, ​Mahrez was a constant threat on the right-hand side of the Citizens' attack.

His assist for Sané's goal was just reward for an excellent performance by the Algerian, who will be hoping he can cement his place in Pep Guardiola's starting lineup on the back of an excellent showing at Vicarage Road. However, with the embarrassment of riches that City possess in the final third, Mahrez will know that he has to put in more than one good performance to be a regular starter under Guardiola.

WORST PLAYER - Following such a complete, professional performance, it would be unfair to single out one City player for under-performing.

Their dominance was to such an extent when they were 2-0 up that Ederson was playing passes out of the six-yard-box with complete ease. Although Liverpool are hot on their tails, it would take some doing for the Reds to keep the pressure on the current English champions until the season's end.

Following a fairly routine victory, Manchester City face a big game in their quest for successive Premier League titles as they travel to ​Chelsea on Saturday.

Watford will be hoping for their first Premier League victory since October in their next fixture. They travel to Merseyside to face Everton next Monday.