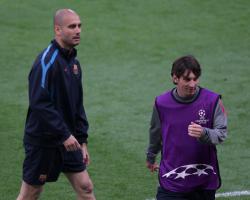 Manchester City are convinced that the Etihad will be LIONEL MESSI's only destination if he ever leaves Barcelona, according to several national newspapers.

before selling the Spain striker on to Arsenal for 50m euros (ÃÂ£40m), Spanish outlet AS reports.

The Gunners are tracking the Lorient left-back RAPHAEL GUERREIRO before a possible summer bid, as Arsene Wenger considers whether to listen to offers for KIERAN GIBBS, the Guardian reports

Former Chelsea and Liverpool midfielder Joe Cole will leave Coventry for MLS side the Tampa Bay Rowdies this summer, according to ESPN.