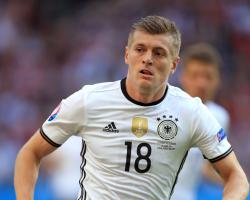 Kroos, who lifted a second Champions League title with Real in May having previously won it with Bayern Munich in 2013, has been linked with a move back to Bayern following Carlo Ancelotti's appointment as manager of the Bundesliga club.

However, he says he has not changed his mind about having turned his back on German football for good when he linked up with Ancelotti in Madrid in 2014.

"I ruled out quite a while ago playing for a club in Germany again and this is still the case," said the 26-year-old to Sport Bild magazine.

Kroos has also been linked with a move to City and he would not rule out linking up with Pep Guardiola in the Premier League, but insisted his focus is currently elsewhere.

"We're in a tournament here where my total focus is on the semi-finals," he said.

"You know that you should never rule anything out in football, but I enjoy a great deal of respect from Real."