Southampton 1-3 Manchester City: Report, Ratings & Reaction as Citizens Get Back to Winning Ways

Manchester City brought their losing streak to an end with a comfortable 3-1 win over Southampton on Sunday afternoon.

After both sides spurned some decent opportunities during the opening exchanges, it was the visitors who opened the scoring on the ten minute mark through David Silva. Bernardo Silva bombed down the right flank before laying the ball on a plate for his namesake, who stroked the ball home with aplomb. 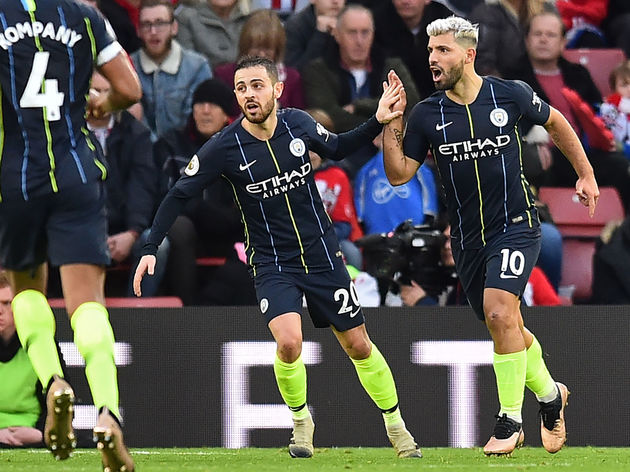 Southampton responded well to going behind and, after surviving a period of City dominance, they were able to find an equaliser ten minutes before half-time. ​Southampton's recent performances have been a far cry from the uninspired showings they were consistently putting in under their former manager Mark Hughes. They certainly didn't disgrace themselves in this one and, if a somewhat controversial penalty decision towards the end of the first-half went their way, then the end result could have looked completely different.

In the end, they were simply outclassed by City, especially as the second-half wore on, but they should hold their heads high for putting up a decent fight. These aren't the sort of games that will end up defining their season, so they can do nothing but move on to the next one.

Hojbjerg was Southampton's standout performer, but his game was overshadowed by the needless red card he picked up for a late tackle on Fernandinho.

Romeu also did a good job in the middle of the park and seemed more than happy to do the dirty work, mopping up loose balls and breaking up as many City attacks as possible. With Hojbjerg set to be suspended, the Spaniard will be taking on extra responsibility in the coming games.

Oriol Romeu won the ball in the opposition's half 3 times in the first half vs. Man City, more than any other player.

Thank god for McCarthy and Romeu so far. Lemina needs to be subbed! #saintsfc

Lemina was hooked off at half-time and it is clear to see why. The midfielder seemed unsure of his role within the team and regularly failed to balance his offensive and defensive duties.

He was also rather lazy off the ball which is something Raplh Hasenhuttl is trying to cut out at Southampton.

As has been said so many times in the past, Premier League titles are never won in December, but they can certainly be lost. ​Manchester City's recent defeats have put them at risk of slipping well behind Liverpool at the top of the Premier League table, so it was absolutely imperative they came away with nothing less than a convincing win.

Apart from the brief spell in which Southampton found their equaliser, they looked to be back to their usual selves, keeping possession with consummate

Sterling is the most improved player in the last year.

Not up for debate.

Not often do we see @sterling7 play on the left, but he’s been absolutely outstanding. A constant menace to Saints.

Southampton make the difficult trip over to Stamford Bridge to face Chelsea whilst Manchester City face a potentially season-defining match against Liverpool at the Ethiad on Thursday.