Jurgen Klopp's side were relentless from start to finish, pressing the Cityzens high up the pitch and forcing turnovers, before unleashing deadly counter attacks against Pep Guardiola's under-strength City defence.

He won't admit it, but the former Barcelona manager should be bitterly disappointed with the way his side performed at Anfield. A poor tactical setup was the catalyst for City's disastrous performance, with first-choice left-back Benjamin Mendy omitted entirely from the match-day squad in place of the less experienced Angeliño - much to the bemusement of the City faithful. Even more discerning was the fact that Sergio Agüero's miserable form at Anfield continued.

The usually reliable forward amassed only three shots on Sunday, with only one of those shots on target.

That takes the striker's tally against ​Liverpool at Anfield in the league to a grand total of zero goals in Premier League eight games, as illustrated below.

As per ​Sky Sports, the Argentine has failed to make any impact against Liverpool at Anfield in a number of outings, perplexing even the most astute tacticians in the game.

Despite holding the accolade for Manchester City's record goalscorer with 173, Agüero hasn't exactly flourished against Liverpool, scoring seven in 22 appearances against the Reds - winning only five games, drawing seven and losing ten.

Agüero's dreadful evening came to a conclusion when he was substituted in place of Gabriel Jesus in the 71st minute, who himself struggled to make any impact on proceedings.

The former ​Atletico Madrid man may point to the fact that City have not historically done well on Merseyside, having last won a Premier League fixture at Anfield back in May 2003. Both sides have played each other 17 times since then, drawing five times, with City losing 12. 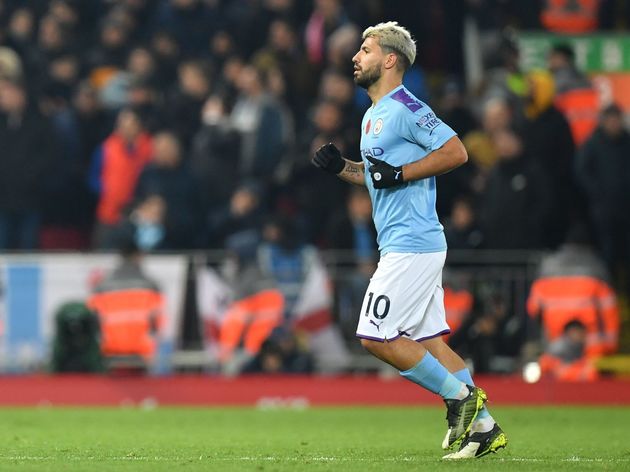 Liverpool's win over Manchester City gives them a nine-point lead over the champions with 26 games left to go. However, City will take some hope after they found themselves seven points behind Liverpool heading into the new year last season - the title race is not over yet.

After the international break, Liverpool head to Selhurst Park to face a stern ​Crystal Palace side before a crucial Champions League tie at home to ​Napoli.

Meanwhile, City entertain Frank Lampard's high-flying ​Chelsea side at the Etihad Stadium, before hosting Shaktar Donetsk in the Champions League.