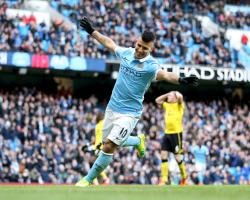 Yaya Toure and Raheem Sterling also got on the scoresheet at the Etihad Stadium while Aguero also missed a penalty in a performance that re-energised City's Barclays Premier League bid after three successive defeats.

The hosts created a series of chances in the first half and it seemed only a matter of time before the apparently-doomed Villa cracked.

Former City defender Micah Richards had an inadvertent helping hand in the first two goals after 48 and 50 minutes and the visitors then capitulated, suffering a 19th defeat of a miserable campaign.

City dominated possession but the goal they wanted took time to come and some supporters grew frustrated before the break.

Wilfried Bony was the prime focus of ire as the striker, making his first start since Boxing Day, failed to fire.

Bony was selected up front alongside Aguero as manager Manuel Pellegrini reverted to his once default 4-4-2 in the search for a spark.

Aguero looked lively, bursting into the area only be denied by a fine tackle from former team-mate Joleon Lescott and then testing Brad Guzan after linking well with Bony.

Aside from that Bony had a tortuous time, failing to make clean contact in front of goal from a Gael Clichy cross and then putting a free header well wide.

Joe Hart came to the rescue by saving to his left.

Aguero stretched the defence with a run to the byline before pulling back to Silva, whose lay-off allowed Toure to pass the ball home via a deflection off Richards.

With Guzan out of the picture the ball flew into the unguarded net.

It soon got worse for Villa as Aguero combined beautifully with Silva on the hour, taking a volleyed return pass from the Spaniard and racing through to lash home his second.

City continued to move through the gears as Pellegrini decided to replace Bony with Sterling.

Within seconds Sterling had forced a save from Guzan and he got on the scoresheet just moments later as he tapped in a low Jesus Navas cross that four Villa defenders failed to cut out.

With Pellegrini perhaps sensing an opportunity to improve the goal difference, Kelechi Iheanacho then came on to keep up the pressure.

The Nigerian immediately won a penalty as he was tripped by Ciaran Clark but Aguero struck the spot-kick against the base of the post.

There was still 17 minutes left for City to score more but they eased off in the closing stages with the job long since done.

A lively presence throughout, he scored two in quick succession but missed out on a hat-trick when striking his penalty against a post.

MOMENT OF THE MATCH: Aguero's first was highly lucky as he benefited from Micah Richards' clearance into him, but the second was a brilliantly worked goal with David Silva

City's striker lifted a pass into the midfielder, who turned the ball over Villa's defence with a measured volley pass and Aguero collected it and beat Brad Guzan at his near post.

MOAN OF THE MATCH: That there was no starting place for City's exciting youngster Kelechi Iheanacho, despite his hat-trick in the FA Cup against the same opponent, with the disappointing Wilfried Bony preferred.

VIEW FROM THE DUGOUT: City created chances but looked out of sorts in a goalless first half when Aguero and Bony were paired together in attack

Villa manager Remi Garde seemed happy to get men behind the ball and settle for a point, and they soon unravelled after conceding the first.