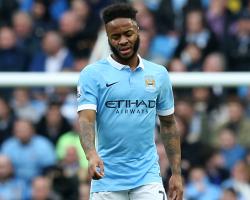 The pair picked up the injuries in Sunday's 1-0 Barclays Premier League derby defeat to Manchester United at the Etihad Stadium.

Speaking after the game, City boss Manuel Pellegrini suggested both players were facing up to a month out.

But, with scans having now been done, it is understood forward Sterling could be facing as much as twice that duration on the sidelines, while goalkeeper Hart could be back in a couple of weeks.

The news regarding Sterling means the 21-year-old is set to sit out nearly all if not the whole of the rest of City's Premier League campaign, which has eight more fixtures and ends with a trip to Swansea on May 15.

The Champions League final is not until May 28, so if City - who take on Paris St Germain in the last eight - make that, he should be back available by then.

England will be monitoring the situation closely as their preparations for Euro 2016 continue.

The Three Lions squad for the tournament will be announced on May 12, and boss Roy Hodgson has until May 31 to submit to UEFA his final 23-man list.

England have fixtures between those two dates against Turkey and Australia on May 22 and 27 respectively.

If Hart is only out for two weeks, the 28-year-old could make his return to action for City in the first leg of the quarter-final against PSG in Paris on April 6.