While it may still be early in the season, Manchester City's trip to Anfield on Sunday to take on Liverpool could potentially prove decisive in the Premier League title race.

The Sky Blues come into the game knowing that a defeat would see their rivals move nine points clear of them heading into the next international break. Equally, a win would see Pep Guardiola's men close the gap to just three points. However, the manager will certainly be aware of the fact that his side are without a win in three matches against Liverpool and, further to this, City haven't won at Anfield in 16 years.

With so much at stake, this is set to be a mouth-watering contest.  With a number of injuries to contend with and decisions to make, here's a look at the starting XI Guardiola should pick to face Liverpool. Claudio Bravo (GK) - Pep Guardiola ​has con​firmed Ederson is ruled out of the colossal clash with Liverpool on Sunday, which is, of course, a major blow for the Citizens. The Brazilian was withdrawn at half time in the Champions League fixture against Atalanta, with Claudio Bravo replacing him. But, erm...Bravo had a nightmare half...or 35 minutes, as he saw red for a sliding challenge on Josip Ilicic.

Nonetheless, the manager reiterated that the shot-stopper is more than capable of filling in for Ederson. It's fair to say Bravo has a little bit of making up to do and he will be given this chance on Sunday.

Joao Cancelo (RB) - Following Bravo's dismissal in midweek, Kyle Walker (yes, Kyle Walker) had to don the gloves and play in goal for the remainder of the game. Of course, naturally, he kept a clean sheet and helped his side secure a 1-1 draw.

While Walker was called upon in the Champions League, his fellow right-back Joao Cancelo is expected to start instead of him on Sunday. The former Juventus man's all-round defending and positional sense will be crucial in City's attempts to shut out a potent Liverpool side.

John Stones (CB) - Stones has struggled to regain his form since returning from injury, but he is expected to start against the Reds. Following his recall to the England team, Stones will be keen to impress. The centre-back also produced THAT goal-line clearance against Liverpool back in January...

Fernandinho (CB) - ​Fernandinho will retain his place in the side at centre half, as a result of the ever-growing list of injuries. The Brazilian's composure and experience will be vital and Guardiola will look towards him to be the leader in the side.

Benjamin Mendy (LB) - Oleksandr Zinchenko is also ruled out of Sunday's clash, meaning Mendy will start at left-back. The Frenchman is also still searching for his best form following numerous injuries, but he will be given another opportunity on the weekend. 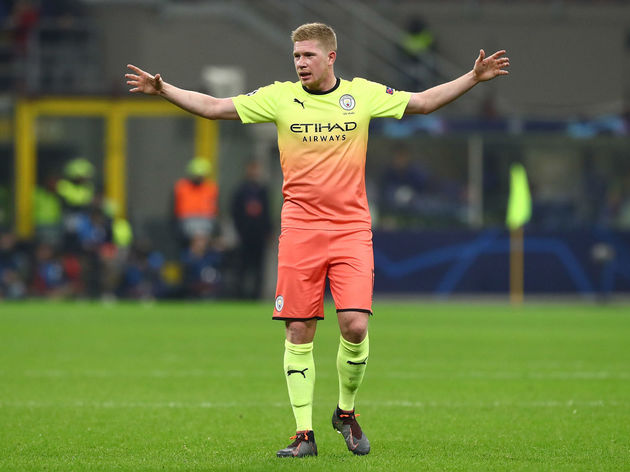 Ilkay Gundogan (CM) - Gundogan is expected to take up his place at the base of the midfield, with Rodri still out injured. The German is the only real defensive-minded midfielder in the side and so there will be a great deal of responsibility on his shoulders to help protect the back four.

Kevin De Bruyne (CM) - Quite simply put, ​Kevin De Bruyne can be simply unplayable when he's at his best. However, even when he's not at his best, the midfielder can see passes no one else can and has the capacity to unlock a resolute defence with one ball. A certain starter.

Bernardo Silva (CM) - ​Silva is trusted by Guardiola and the manager looks towards him in the big matches. He works tirelessly for the side, acting as the first line of the press when out of possession, while he will also test and probe defences when on the ball. Bernardo should move into the midfield three on Sunday as David Silva is expected to be out, but he is a more than capable replacement. Riyad Mahrez (RW) - Mahrez has started the season in fine form, scoring twice and providing three assists in eight appearances in the league. He is expected to take up his place in the starting XI, which means he will need to forget about past events or, more specifically, that woeful penalty miss at Anfield.

Raheem Sterling (LW) - ​Sterling's career is going from strength tostrength at ​City and he has been electric once again this season, having already scored 14 times. In no uncertain terms, the Englishman is world class.

Sergio Aguero (ST) - Did someone say world class? While ​Aguero is renowned for his ability to score goal after goal after goal, his overall game is equally spectacular - the Argentine is a supreme talent.