​As if a full weekend of FA Cup action wasn't enough, the Carabao Cup now makes its return on Tuesday with a mouth watering clash between Manchester United and Manchester City.

The semi final first leg will see both Manchester teams go head to head at Old Trafford, with the prospect of a Wembley final at stake.

It's a competition Pep Guardiola has fared well in in the past - winning the trophy in two out of the three seasons he's managed in England - but he'll face a tough task against an unpredictable United side who gained the local bragging rights with a victory at the Etihad last month.

With that in mind we take a look at who we think will start for ​Manchester City in the derby match. Claudio Bravo (GK) - Guardiola has tended to rotate his goalkeepers in the cup competitions, and despite Ederson's recent Premier League suspension, you can expect that to carry on here. Bravo surprised many by actually saving a shot against ​Everton, before going on to inexplicably gift the Toffees a late consolation goal. If United get shots off they'll have a chance.​

Kyle Walker (RB) - ​Kyle Walker has been unlucky to find himself out of the City starting XI at times this season, but with the quality available to Guardiola it's something he's had to accept. Given that Joao Cancelo played in the victory over Port Vale it would make sense for the former ​Tottenham right back to get the nod here.

Nicolas Ottamendi (CB) - After missing out on the games against ​Sheffield United and Port Vale with illness, you can expect to see Nicolas Ottamendi back in the side again on Tuesday night. The Argentinian has largely had a season to forget, but will be hoping an impressive derby display can help kick start his campaign.

Fernandinho (CB) - Given that ​John Stones has already suffered three thigh injuries this season it's unlikely that he'll play soon after his latest comeback against Port Vale. The game is probably too big to risk Taylor Harwood-Bellis or Eric Garcia so it is likely that Guardiola will turn to the trustworthy and experienced ​Fernandinho at centre back once again.

Benjamin Mendy (LB) - ​Mendy has recovered relatively well from his horrible mistake in the defeat to ​Wolves, and could be key against United. Given how Ole Gunnar Solskjaer's side will likely sit back, the Frenchman's offensive attributes could offer Man City yet another weapon in attack. It's a risk if ​United are effective on the counter once again though. Rodri (CDM) - Rodri has been good since his move to the Etihad, but has struggled with injuries like many in the Manchester City squad. With Fernandinho pushed back into defence you can expect the former ​Atletico Madrid man to play the pivot role that Guardiola values so highly in his teams, picking the ball up off the defence and starting attacks.

Kevin De Bruyne (CM) - That inexplicably bad cross against Sheffield United aside, ​Kevin De Bruyne has proved why he is one of the best creative midfielders in the world in recent weeks. The Belgian has yet to appear in the Carabao Cup this season, but with such big rivals as the opposition you can expect him to make his debut.

Phil Foden (CM) - After scoring against Port Vale, you have to wonder what else ​Phil Foden has to do to get a start in this Manchester City side. Even with injuries, poor form and suspensions the 19-year-old has still only managed eight starts this season. Most of those have come in the Carabao Cup, so you can expect him to continue in the side. 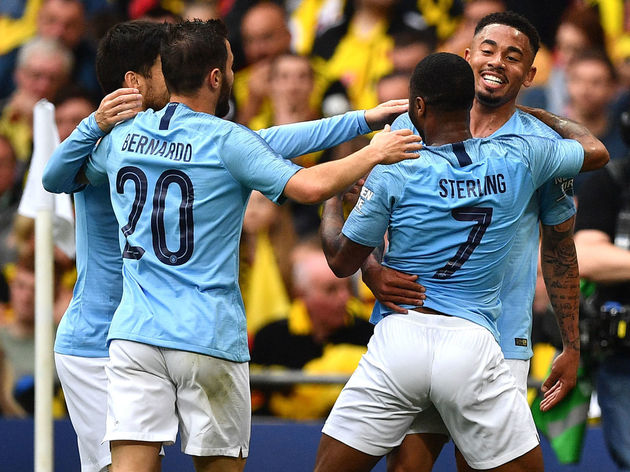 Bernardo Silva (RW) - The fact that Bernardo Silva was brought off after around 75 minutes of the victory over Port Vale would seem to suggest that the Portuguese international is going to start on Tuesday. Either he or Riyad Mahrez would be a great option for Guardiola, but the 25-year-old will want to make amends after giving away a penalty in December's derby defeat.

Gabriel Jesus (CF) - After ​Sergio Aguero played his first 90 minutes since returning from injury on Saturday, you would expect ​Gabriel Jesus to get the nod up top for City. That's not to say that Brazilian isn't there on merit after netting five goals in his last six Premier League starts. He's yet another sign of how good a squad the Cityzens have.

Raheem Sterling (LW) - Sterling captained Manchester City in their quarter final victory over Oxford United, and has three goals in two appearances in this season's Carabao Cup. With 20 goals in 29 matches this season he has established himself as one of the best forwards in the world. Up against what is likely to be Ashley Young at right back, he'll really fancy his chances.