When Manchester City last came to Old Trafford back in January, the gap of quality between the sides was startling.

The League Cup semi-final first leg was utterly bossed by Pep Guardiola's side, who had their place in the final booked by half-time with a distinctly dominant performance.

Kevin De Bruyne ran the show in midfield, while ​United, in contrast, couldn't get a foot on the ball, let alone come up with a moment of inspiration to unpick the City defence - Marcus Rashford's consolation notwithstanding.

Scott the Scot wins it.

Fast forward two months and the situation could hardly have changed more.

The most defeats a Guardiola side had ever suffered in a league season prior to this one was six. Scott McTominay's wonderful late finish into Ederson's empty net ensured he lost their seventh of this campaign Old Trafford on Sunday. They still have 10 to play - including Liverpool next month.

There was once a chasm between Guardiola's ​City and Ole Gunnar Solskjaer's United, and while the 12 points that currently separate them still represents a substantial margin, Sunday's outing showed us that the gap is perhaps now more narrow than it has ever been while the Spaniard has been in town.

No shortage of that is down to City's shortcomings this season. This was the third time since December that United had beaten City over 90 minutes, but the 2-0 success was the most resounding victory yet.

3 - This was Manchester City’s third defeat against Manchester United in all competitions in 2019-20 – it is the first time in Pep Guardiola’s managerial career that he has suffered as many as three defeats against a specific opponent in a single season. Tripled. #MNUMCI pic.twitter.com/213Ej0FzAY

Where the champions (for another week or two) were once a flawless, relentless force, they looked lethargic, dull and out of ideas. ​Bruno Fernandes

The Portuguese midfielder's impact has been potently felt since his deadline day arrival, and it has been no more prominent than in the phase of play that led to the opening goal. From a free-kick, he and Fred surreptitiously gave Anthony Martial a signal, before Fernandes dinked an audacious ball over the bewildered City back line into the run of the striker, whose effort squirmed under Ederson.

It was the kind of moment of focused ingenuity that was once a trademark of City and so alien to United, but this time, it proved to be the difference for the latter.

Bruno Fernandes’ first half vs. Man City by numbers:

You would be overstating it to suggest this one match demonstrated that the tables have turned in Manchester; clearly City remain the stronger side, and this defeat notwithstanding, it is likely that the 12 point gap between the two will be greater come the end of the season.

But there were a number of moments that symbolised the narrowing of the abyss, however, as even the two goalkeepers switched roles for a day. ​David de Gea was a calming influence, while the normally imperious Ederson was erratic; he was weak for the opener, he bowled the ball straight to McTominay for the clincher, while his overconfidence under pressure from Martial very nearly cost them another in between.

For long spells, City did take charge, but where United would once have crumbled under duress, they stood resolute; the one disappointment perhaps that they have accelerated Liverpool's inevitable crowning as champions. 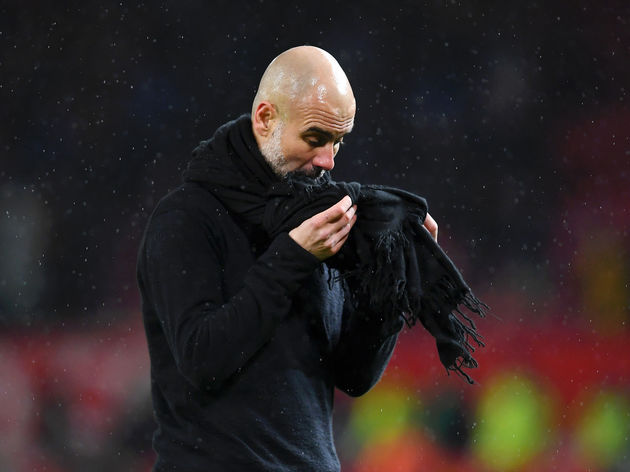 City remain the better of the two sides despite another off-day here, and that will be the case for the rest of this season. But as they crumble, losing their grip on the ​Premier League title and staring into the grave, sunken face of a European ban, United only seem to be going from strength to strength.

They have the explosive arrival of Fernandes to thank in part for that, but they look far better as a cohesive unit than they have since the early days of Solskjaer's arrival.

The club has a tendency for self-destruction and you know it won't be plain sailing from here on out. But if this derby taught us one thing, it's that the overall balance and Manchester isn't a million miles away from being restored to usual parity.