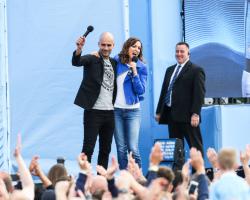 The 45-year-old has signed a three-year deal at City and will hope to repeat the trophy-laden spells he enjoyed at Barcelona and Bayern Munich, where he won six league titles, a pair of Champions Leagues and four domestic cups across the two countries

However, the more competitive nature of the Premier League means Guardiola faces arguably his greatest task yet in delivering domestic and continental success for his new club

Almost 6,000 thousand supporters were present for a question and answer session with Guardiola at the team's academy base, with his first official press conference due to take place next week, and the Spanish boss insisted he had taken the post as Manuel Pellegrini's successor because he wanted to test himself in England.

"To try, every game, every weekend that Manchester City play, that the people can be proud and enjoy our way to play

At the end, we will see what is our level to achieve our prizes, our titles.

"But I want the people who love football to be proud of what we did, that is the most important thing."

Through his work at boyhood club Barca and with Bavarian giants Bayern, Guardiola has cultivated a reputation for possession-based football which City fans are hoping he can instil in the north west of England too.

But the man at the helm stressed he needs to learn about his players first and in particular which ones need a dose of tough love.

"You will see when we are going to play the first game," he added of the style he intends to implement.

"First I have to meet my players, I have to know them

I have an idea but I need time."

Having spent the bulk of his playing career in Catalonia, Guardiola's first taste of English football will come in the dugout next month and the chance to sample the sport on these shores was something he always wished to experience.

"One of my dreams would have been to play here like a football player, it was not possible and now my dream has come true," he said.

"Of course the atmosphere here is 'wow', it's amazing

I want to live that in life.

"I prove myself if I am able to be a good manager here in England, that is the reason why

I come here to learn, learn about the way the people live here, for my family, for my kids

That is why I was curious to move in Europe and learn about what it means to live in England."

"He's not a bad player, this guy, but I am sorry Messi has to stay in Barcelona for the rest of his career," Guardiola replied