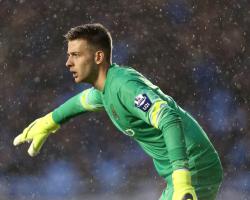 After their game against Manchester United was cancelled on Monday when bad weather left the pitch unplayable, Guardiola was keen to assess as many players as he could

City struggled in the opening stages against the Bundesliga runners-up and a fter a quiet first half in which neither side created many chances, Guardiola made eight changes - swapping youth for experience with the likes of Yaya Toure, David Silva and Aguero coming on

After 78 minutes, Alex Garcia's pass found Silva on his own and he selflessly played in Aguero for an easy tap in

Twenty-year-old substitute goalkeeper Angus Gunn proved to be the hero for City, saving penalties from Felix Passlack, Jacob Larsen and Mikel Merino, whilst Raheem Sterling and Garcia both missed their opportunities