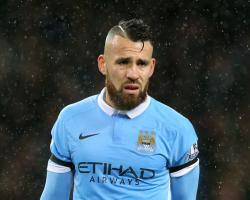 The Argentina centre-back was forced off with a dead leg in the first half of City's Champions League last-16 second leg against Dynamo Kiev at the Etihad Stadium on Tuesday.

Otamendi was hurt in a challenge from Vitaliy Buyalskiy and he seemed to aggravate the problem while attempting to run off the knock.

It compounded a difficult start to the game for City, having already lost captain - and Otamendi's fellow central defender - Vincent Kompany in the opening minutes.

But while Kompany is expected to be out for at least a month, Otamendi could be back in action by the weekend.

The 28-year-old said: "It's very similar to a dead leg injury I have had before

I will have a test tomorrow.

"The blow wasn't that serious but it was better not to continue and come off.

"The test, I hope it shows nothing and am hopeful I can be there on Sunday.