Samir Nasri: "I'm not scared about Chelsea or the league.

"There is plenty more to play and everyone is going to have difficult games and if we win our two games we are going to be top of the league. It's better not to talk but to act on the pitch.

"We are there in the league, if we win our two games in hand we will be top with Chelsea. 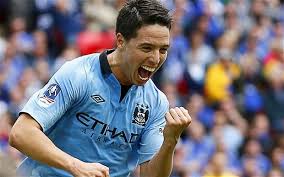 "It's going to be tough until the end because Liverpool are still there. And we play Wigan home in the FA Cup and it's going to be a good time to have revenge.

"After that the semi-final it's at Wembley so we don't have a weird place to play away, it's in one place.

"The goal against Sunderland? It's what they pay me for and bring me to the club [for]. It's about time to show them what I can do.

"Everyone at the club has been amazing with me, believed in me and when you have this feeling your confidence is really high and that's why you want to do good for them."