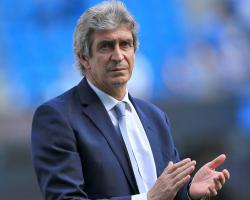 West Ham's victory over Manchester United on Tuesday put City back in control of their battle to finish in the Barclays Premier League top four.

Fourth-placed City surrendered the initiative as they were pegged back to a 2-2 draw by Arsenal last week and the mood at the Etihad Stadium consequently fell flat.

Pellegrini admits the players were down but he was sure West Ham - who were it not for a vastly inferior goal difference might still be in Champions League contention themselves - would still have a say.

Now City now go into their final game at Swansea with a two-point advantage and Pellegrini hopes his side are fired up and ready to complete the job.

"This Premier League is not easy," said Pellegrini at a press conference

"Maybe all of you were thinking we were out but you must win all your games in every stadium and every game is very difficult.

"After the game on Sunday I was very disappointed, especially not to get the three points here with our fans, but I was sure United had a difficult task to do.

"I just was talking with the players, (saying) that we are not ready, (because of) the same atmosphere that everybody thought we were eliminated from the first four positions - but now it is in the other sense.

"I was not surprised, I was sure West Ham was a really tough game for United

I think the teams in the first four positions are the best teams of the season and there is a lot of difference between our team and United over the whole of the season.

"But Swansea are a difficult team when you play away

They have done well in the last two games

We must play a very good game to qualify."

City, so inconsistent this season, produced one of their best displays of recent weeks but were unable to make the most of some strong spells of superiority.

"I want to finish by playing the way we did against Arsenal," said Pellegrini, for whom the match also marks the end of his reign as City boss.

"I think we did play a very good game

If we finish playing that way and we win, it will be a good finish."