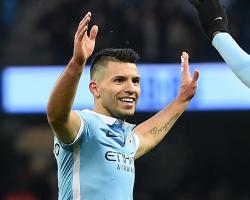 The Chilean left regular starters Yaya Toure, Raheem Sterling, Bacary Sagna and Jesus Navas on the bench as he sought to freshen up his side following Wednesday's stalemate against Everton.

The result was a convincing display, with Sergio Aguero scoring twice and Fabian Delph and David Silva also on target, as City pulled level with title rivals Arsenal in the Barclays Premier League.

"It was very important to win, having made five changes," Pellegrini said.

"We have to play so many games in January and it is very important to have the whole squad involved in what we are doing if we are to remain a competitive team in all of the competitions.

"I think it was important to score the first goal

When we are able to score the first goal, we know we are going to have more space.

We don't always score but with space we are more dangerous.

"To have made so many changes but win the way we did is very useful for the future."

Aguero was not only clinical in front of goal but passed up a hat-trick opportunity to set up City's fourth goal for Silva.

The Argentinian now looks to be getting back into his stride after the heel injury that sidelined him in December.

"I saw Kun in the last game," Pellegrini said

"Maybe he didn't score because (Tim) Howard made two beautiful saves, but he is making all the movements he does when he is 100 per cent fit

In every game, he will continue improving."

Pellegrini particularly felt his decision to name Toure among the substitutes would have a good long-term benefit.

The Ivorian came on for just the last 33 minutes and was involved in Aguero's second goal.

"He played a good game against Everton and he had less than 72 hours to recover," Pellegrini said

"I didn't think he could complete the full game with high pace.

"He is a professional, he works very well and he understands what I think

He agreed with me."

Pellegrini added that defender Aleksandar Kolarov, who was carried off with a calf injury early in the second half, would be assessed on Monday.

Palace's defeat continued their slide after a positive first half of the season, with the Eagles having now not won - or scored - in five league games.

Manager Alan Pardew seemed particularly disappointed with the performance of goalkeeper Wayne Hennessey, who, after a bad error against Aston Villa in midweek, might have done better with Delph's 22nd-minute long-range opener.

"Wayne is going to have to show me this week in training," Pardew told BBC Sport

"A mistake at Villa, he needed to respond today and made another mistake.

"The ball is in his court to keep out the other two goalkeepers but I need to see it in training, I need to see a reaction from him

I will give him that chance because he deserves it."

On the whole, however, Pardew felt his side performed reasonably well.

"That was not a bad performance from us," he said in his post-match press conference.

"We got in some great positions, but perhaps our final pass could have been better

We certainly threatened the goal.

"The goals changed the complexion of the game and the result doesn't reflect what went on the pitch."