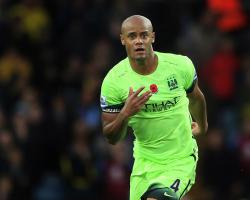 The influential Belgium defender has made just 12 appearances this season due to calf injuries and was expected to be out until at least the end of January.

Now manager Manuel Pellegrini has conceded even that target date might be optimistic as the player undergoes analysis to try to get to the bottom of his persistent problems.

The 29-year-old's current lay-off is his 12th for a calf injury since the start of the title-winning 2011-12 campaign, and his third this season.

Asked if he could give an update on Kompany's progress at his latest press conference, Pellegrini said: "Not in this moment

At this moment it is difficult to tell you an update about that."

He later added: "Vincent maybe not so soon, but for the last part of the season he could be fit."

Of the 11 games in which he has not featured, the team have kept just one clean sheet

When he has been on the field, they have only conceded once.

Now with Eliaquim Mangala also sidelined with a hamstring injury, City are looking short of central defensive options, but Pellegrini has no plans to sign cover during this month's transfer window.

He said: "We have (Martin) Demichelis, we have (Nicolas) Otamendi, we have Bacary Sagna, who can play in a central defensive position, we have Cameron (Humphreys), who is a young player who featured in pre-season with the squad

So, at this moment, we are not thinking about making a change."

Pellegrini also insisted he had no plans to sign a new striker and instead praised 19-year-old Kelechi Iheanacho, who scored his fifth goal of the campaign in Saturday's FA Cup win at Norwich.

He said: "Kelechi has been involved from the first game of this season

He's in the squad because he's important in that position

It's important for him that when he has the opportunity to play, to do it in the way he did in the last game against Norwich.

"He's the answer for a lot of questions that you asked before about whether we need to bring in another striker - the other striker is Kelechi."

Forward Wilfried Bony has struggled to make an impact since his ÃÂ£28million move to City from Swansea last January but Pellegrini would not comment on reports he could leave the club.

The Chilean said: "It's speculation - nothing more

I don't talk about rumours

Our squad is complete

We have options until the last day, but at the moment, no news."

City return to Barclays Premier League action on Wednesday as they host Everton a week after they were beaten at Goodison Park in the first leg of their Capital One Cup semi-final.

"The games are not related," Pellegrini said

"Everton will be more related with Crystal Palace, who we must play on Saturday, because we are going to have less than 72 hours to recover the players.

"Every game is different

We must try to beat Everton (on Wednesday), and after that we are going to think about Crystal Palace."

City have been consistently linked with the Catalan in recent years.

Guardiola has apologised to any managers his announcements may have undermined, but Pellegrini is indifferent to the situation.

He said: "I'm not worried about that

I don't think he has to apologise to me

I have nothing to say about that."