​Manchester City's bid for a third successive Premier League title continues on Sunday as they welcome Wolverhampton Wanderers to the Etihad Stadium.

A 3-1 win at Everton kept the gap between Pep Guardiola's side and Liverpool at five points, with Kevin De Bruyne putting in another virtuoso display to help his team to victory. They followed that up with a midweek triumph over Dinamo Zagreb in the Champions League to maintain their 100% record in Group C. 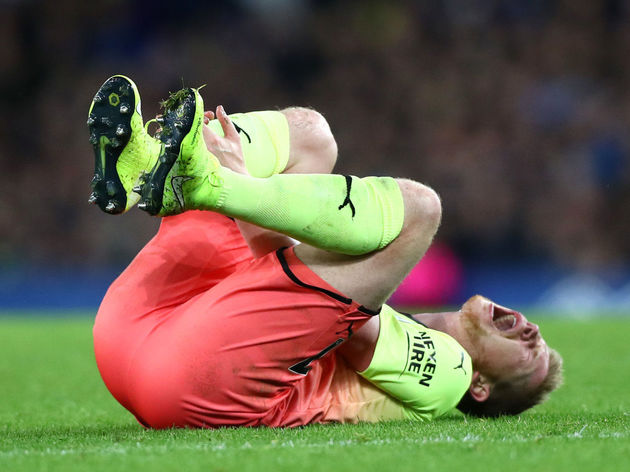 The visitors recorded their first win in the league thanks to a 2-0 triumph over ​Watford at Molineux last time out, while Willy Boly hit a stoppage-time goal to help them beat Besiktas in the Europa League on Thursday.

Serious knee injuries mean ​City duo Leroy ​Sane and Aymeric Laporte will be missing until the new year, with ​John Stones likewise unavailable due to a thigh strain.

Guardiola could also be without De Bruyne - who missed the Dinamo match - after he hobbled off with a groin problem in the victory at Goodison Park. Diogo Jota is the only member of Nuno Espirito Santo's squad expected to sit out on Sunday, having picked up a knock in late September.

​This is a fixture steeped in history, with a total of 120 meetings between the two clubs. City hold a one-win lead over ​Wolves, currently sitting on 48 victories.

A 3-0 triumph at the Etihad last January saw the Sky Blues move ahead of their opponents in the overall record, with ​Gabriel Jesus grabbing a brace to keep his side firmly in the title race. They've struck 36 goals in all competitions this campaign, ​Sergio Aguero and ​Raheem Sterling's joint haul of 16 helping the Sky Blues reach that total in only 11 games.

Your centre back could never! 

Unreal first touch and finish from a defender  pic.twitter.com/hV89Jernwq

Wolves have been a shadow of their former selves in the ​Premier League, but that is in large part due to their Europa League endeavours.

They got off the mark in Group K with a 1-0 defeat of Besiktas in midweek, Boly sliding in a last-gasp winner to breathe life into Wanderers' continental campaign.

​Here's a look at the teams' last five results:

It was not an easy game for them at Vodafone Park and Thursday night football is invariably draining for clubs with a limited squad as thin as theirs. They will be tired heading into the match with City and that is not a good place to be against the champions. Guardiola's boys will ruthlessly expose any weakness, and gaps will surely open up as the contest wares on.