​Manchester City host Leicester on Monday in another potentially crucial game in the race for the Premier League title.

Liverpool's last-gasp win over Newcastle on Saturday took Jurgen Klopp's side back above the reigning champions by two points, and meant that the title race will go down to the wire on the final day of the season.

Pep Guardiola's side can regain control over the battle for top spot before then with victory on Monday, but will face a tough challenge against a resurgent ​Leicester side. The Foxes have won six of their nine games under Brendan Rogers so far.

Here is 90min's preview of another huge clash in the Premier League title race.

​Manchester City will be without star midfielder ​Kevin De Bruyne for the crucial clash at the Etihad, as the Belgian continues to recover from a hamstring injury which looks set to keep him out for the remainder of the season.

Fellow key midfielder ​Fernandinho is also a doubt for Monday's game, with the Brazilian having trained with strappings on his knee on Friday and appearing to be short of match fitness, meaning that a late decision could be made on his availability to face Leicester. Full back ​Benjamin Mendy is also set to miss out once more with a persistent knee problem which could see the Frenchman miss the rest of the season.

Meanwhile, Brendan Rodgers has an almost fully fit squad at his disposal, with Daniel Amartey remaining the Foxes' only senior absentee. The midfielder is continuing to recover from an ankle injury.

Any nerves that City may have ahead of their clash with Leicester due to the magnitude of the occasion may be eased by their superior head to head record against the Foxes.

Of the 117 times that the two sides have met previously, the Citizens have won 58 times, whilst Leicester have won on only 30 occasions between the two sides. 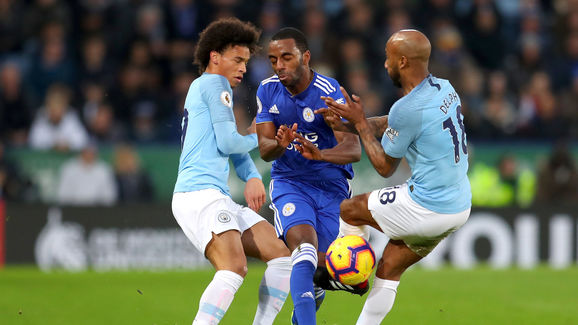 The remaining 29 meetings have resulted in draws, though the most recent encounter resulted in a shock 2-1 victory for Leicester on Boxing Day. The Foxes responded to ​Bernardo Silva's opener with strikes from Marc Albrighton and Ricardo Pereira to seal victory at the King Power.

City have shown form worthy of champions in the Premier League of late, but Leicester's recent run under Rodgers has been largely impressive too.

Guardiola's side crashed out of the Champions League in unfortunate fashion at the hands of ​Tottenham, but recent victories over Mauricio Pochettino's side, neighbours ​Manchester United and a hard-fought win at ​Burnley in the league have had the feel of huge wins.

If Leicester fail to beat Manchester City on Monday, Wolves will be confirmed in 7th.

And if City then beat Watford in the FA Cup final, Wolves will play in the Europa League next season.

Whilst City have efficiently gone about their title defence, Leicester have staged a late-season resurgence under Rodgers. Defeat at home to ​Newcastle was a recent blemish, but the Foxes' improved performances have yielded some fine results.

A 2-2 draw away to ​West Ham showed renewed character​ and fight among the Leicester ranks, whilst victories over ​Bournemouth and ​Huddersfield have built momentum, but a 3-0 victory over ​Arsenal last time out was the pick of the recent bunch for Rodgers' side.

Here is a look at how both sides have fared in their previous five outings:

City have shown few nerves so far as their title defence has intensified towards the end of the season, amid a tense battle with ​Liverpool for top spot​, but Guardiola's side face another big test against Leicester.

The Foxes may have little to play for in the remainder of their campaign, but they are playing with real energy and freedom of late under Rodgers, and their renewed form and fearlessness could pose a considerable threat to the reigning champions. Monday's clash will be far from a routine victory for City en route to retaining their domestic crown, particularly given the fine recent form of ​Jamie Vardy. Leicester have a big part to play in this game, and Liverpool's win on Saturday has piled the pressure on City to match their rivals pound for pound.

However, City's relentless push in the title race is unlikely to let up at this late stage, and Guardiola's side should have enough to battle to victory once more at the Etihad.