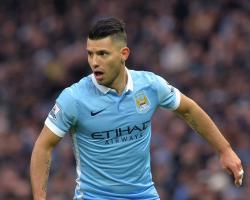 Aguero missed seven City games earlier this season due to a hamstring problem sustained on international duty with Argentina.

He subsequently sat out four games with a heel injury not long after, then returned against Arsenal on December 21, but came off in the second half with pain in his knee and was an unused substitute for the next match against Sunderland.

The 27-year-old has started every fixture since then, and he told Sky Sports News: "Right now I feel fit and well.

"With the last injury I picked up on international duty I carried on playing when I should have come off.

"That could have been avoided but you always want to play, especially for your country.

"Argentina really needed to win, so I said to myself 'I've got to play'.

After trying so hard to keep fit, the slightest niggle and this happened.

"Now I won't risk myself - as happened for the game against Sunderland.

"Now I feel like I'm getting up to full fitness for games and missing as few as possible, that's the most important thing.

I've tried to do that before and that's when I've injured myself."

Aguero, who has scored 13 goals in all competition this season, added of his fitness struggles: "You're working hard in the gym so it could be that.

"Then you think: 'What else could it be? Could it be your diet?' So you change it

Then no, maybe it's not that

Last year I changed my diet

I've always eaten well but now I eat a few more vegetables than I did.

"As well as that I try to do things in the gym to protect the quadriceps, the hamstrings and the glutes to be fit to compete properly."

Meanwhile, Aguero has been telling international team-mate Lionel Messi why he should not be put off by the prospect of bad weather if he were to consider moving to Manchester.

Barcelona's Ballon d'Or winner Messi has been linked with City, and Aguero - who has previously expressed his hope such a transfer could happen - said: "He already knows there's no beach! I said to him, at the end of the day we spend most of our time at home.

"We play every three days and just eat and rest between games - so the weather is not really that important.

"So I told him Manchester is ideal as a city because you stay home, you play every three days, we can eat and play football together."