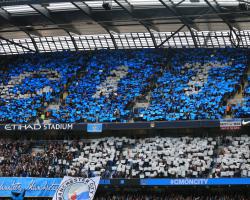 A number of supporters have expressed dissatisfaction at the cost of seats for the second leg of the last-eight clash at the Etihad Stadium on April 12, which for full-paying adults range from ÃÂ£45-60.

These represent a considerable rise on prices for the previous round against Dynamo Kiev last week, which were ÃÂ£30-40, and for the group stage matches against Juventus, Sevilla and Borussia Monchengladbach, which varied from ÃÂ£20-40.

But the PSG prices do align with those for the visit of Barcelona in the round of 16 last year and the club say levels are set according to various factors.

A club statement read: "Pricing for each match is reviewed on an individual basis, based on factors such as the opposition and stage of competition.

"As this match is the quarter-final of Europe's biggest cup competition and the first time the club has progressed to this stage, we believe the ticket prices are a fair reflection of the profile of the game."

Members of the 'Seasoncard' and 'Cityzens' schemes are entitled to a ÃÂ£5 discount, meaning that some juniors can purchase tickets for as little as ÃÂ£10

Regular prices for under-16s range from ÃÂ£15-30, with some seats ÃÂ£10-20 less than their equivalents for Barcelona last year.

But for some fans these measures are not enough in a current climate that has seen some supporters' groups make headway in protests against ticket prices.

A well-publicised walkout by Liverpool fans recently forced their club into a climbdown over a planned increase while earlier this month all Premier League clubs agreed to cap away ticket prices at ÃÂ£30 from next season.

Kevin Parker, general secretary of the Manchester City Supporters Club, said: "You would expect this game to come with a premium, but I think the premium they have added is just a jump too much.

"The mood of clubs has started to soften on ticket prices

With everything that has been happening, the levels the club have set them at for this game have come as a surprise.

"The club also have this very loyal fanbase that has followed them to all home and away games, including the Capital One Cup final.

"They don't seem to have added a reward factor into those ticket prices and reduced them."

Parker thinks such prices could affect the attendance

The attitude of City fans towards the Champions League is already generally considered lukewarm and their booing of the competition's anthem in frustration at governing body UEFA has become a regular occurrence.

If we want to fill the stadium for the game against PSG, these are not the kind of prices to do that."