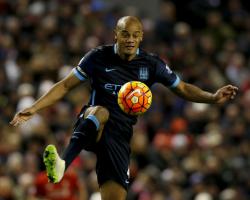 City slipped up again at Liverpool on Wednesday - losing a third successive Barclays Premier League game for the first time since 2008 - to remain 10 points behind leaders Leicester.

Yet with rivals Tottenham and Arsenal also losing on the same night, fourth-placed City did not lose much ground on the sides above them in the latest round of fixtures.

They also have a game in hand - having 11 to play compared to the 10 of each the top three - and captain Kompany feels all is still to play for.

The Belgium defender said: "We can't make any more mistakes but I didn't expect all the other teams to lose.

"It is an awkward season - good for the fans but you can't predict anything can you? If there is one guarantee for this season it is nothing is sure."

City had the tables turned on them by Liverpool at Anfield three days after beating the Merseysiders in a dramatic Capital One Cup final penalty shoot-out.

Manager Manuel Pellegrini blamed fatigue for the 3-0 defeat, recalling also that his squad produced a stirring performance away at Dynamo Kiev in the Champions League a week ago.

City never got going and were beaten by first-half goals from Adam Lallana and James Milner with Roberto Firmino adding another after the break.

City now need to get a positive result against relegation-threatened Aston Villa at home on Saturday and, with Tottenham facing Arsenal, it could be another intriguing weekend in an unpredictable competition.

Kompany said: "If you look at this result it could have been worse, although we are not happy with the result or the performance.

We are not going to draw too many conclusions from this game.

"We will see what is happening at the weekend; Arsenal and Spurs are playing against each other, we are at home to Aston Villa.

"We need to get the three points and maybe Leicester will drop some points."