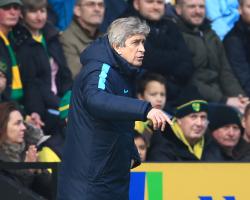 At times during the season the clubs have seemed to be heading in opposite directions but Pellegrini, guarding against complacency, has warned there is little to choose between them.

The two sides clash in a derby that could have big implications for both of their Champions League ambitions at the Etihad Stadium on Sunday.

United, after a turbulent campaign, are hoping to mount a late charge to break into those Champions League places.

Pellegrini said: "I think they are very close, both squads

Both of them, they have good players

United have also invested a lot of money to try to improve their squad.

"United have a very good squad

It doesn't matter which players play, or in which way they play, they are always a dangerous team."

Pellegrini still has ambitions beyond the top four - and is not ruling his side out of title contention - but is well aware of the importance of this fixture in terms of securing Champions League football for next season.

With victory City can deal a blow to United's outside chances of overhauling them but losing could leave the club - who are preparing to welcome Pep Guardiola as new manager in the summer - living on their nerves.

Pellegrini said: "It's a game of six points

There are 21 more points to to play for so you never know what will happen."

Midfielder Fernando also acknowledges there is a lot riding on what is likely to be an intense fixture.

The 28-year-old told the club's website, www.mcfc.co.uk: "This is a huge game for both teams.

"Even though I've played in derbies in Brazil, the closest I probably came to the Manchester derby was when Porto played Benfica.

"You have to respect a fixture like this because of its history and what it means to the fans, the city and the players, but ultimately it's a game you have to win."

City will have to overcome the loss of captain Vincent Kompany, who faces at least a month out with the calf injury suffered against Dynamo Kiev in midweek

Nicolas Otamendi, who left the field with a dead leg in the same game, is hopeful of recovering in time to feature.