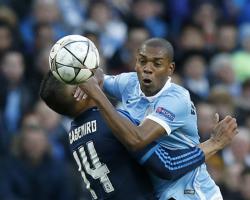 Manuel Pellegrini's men face a daunting task as they tackle the 10-times winners, who are boosted by the return of Cristiano Ronaldo, at the Bernabeu in the second leg of their semi-final.

But City have shown signs of increased maturity during their best-ever run in the competition and and last week's goalless draw in their first leg offers hope.

Midfielder Fernandinho said: "I think we've learned from our mistakes in the past

We've had some disappointments, we've had some happiness, so you learn from those and take something from everything.

"In the last 16 and the quarter-finals we also beat two good teams to reach this semi-final stage, and now we are very close to achieving a historic moment for all the players, and for the club as well.

"So we will go in with all our strength, with a lot of concentration and everything we have to win this title - because I'm sure this is a title that would leave its mark in the life of every player and every Manchester City fan."

Ronaldo missed the first leg with a thigh injury and his fitness has been the subject of much speculation since.

But coach Zinedine Zidane has confirmed the prolific Portuguese star, the Champions League's record goalscorer, is now "100 per cent" fit.

Pellegrini, who is facing his former club, said: "Cristiano will always be a different player

He scores a lot of goals and has throughout his six years here.

"However, I don't think Real are just Cristiano Ronaldo

We must work as a team defending and attacking

It is not just against Ronaldo but against Real Madrid."

Pellegrini, who is making way for Pep Guardiola at the end of the season, believes his side can prevail.

The Chilean said: "The pressure in the Bernabeu is high pressure but I think we have the personality and the football to try to beat them - but we will need a very good performance."

Yaya Toure is set to return for City after overcoming a thigh injury but Pablo Zabaleta has joined David Silva on the sidelines with a torn calf and his season could be over.

Real might be welcoming Ronaldo back but two other key players in forward Karim Benzema and defensive midfielder Casemiro will be missing.

City defender Gael Clichy, who joined Pellegrini at the pre-match press conference, also spoke about the magnitude of the occasion.

The France international said: "It's not every day you can play a semi-final of Champions League but it will only be special if we go through.

It's going to be a really tough game we want to make history and to go through."