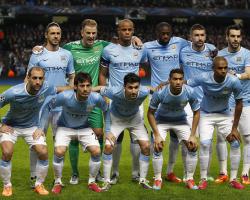 However, UEFA confirmed in their statement that City will have 40million euros of the fine returned if the Premier League champions comply with spending controls agreed with UEFA

Manchester City have accepted the sanctions, which also include a salary freeze on their Champions League squad for the next two seasons, and to "significantly limit spending in the transfer market for seasons 2014-2015 and 2015-2016", said UEFA in a statement.