​Manchester City already have one foot in the Carabao Cup final after a 3-1 win against Manchester United at Old Trafford, where Bernardo Silva scored the pick of the bunch to give Pep Guardiola's side the advantage in the two-legged semi-final.

It was a quiet opening 15 minutes, but Silva was eventually given time and space on the edge of the area to pick out the top corner of David de Gea's net with a goal which will be remembered as a classic Manchester derby strike.

City's lead was doubled when Riyad Mahrez broke away on the counter-attack, while things went from bad to worse when Andreas Pereira turned the ball into the back of his own net after Kevin De Bruyne's deflected shot to make it three before half time. 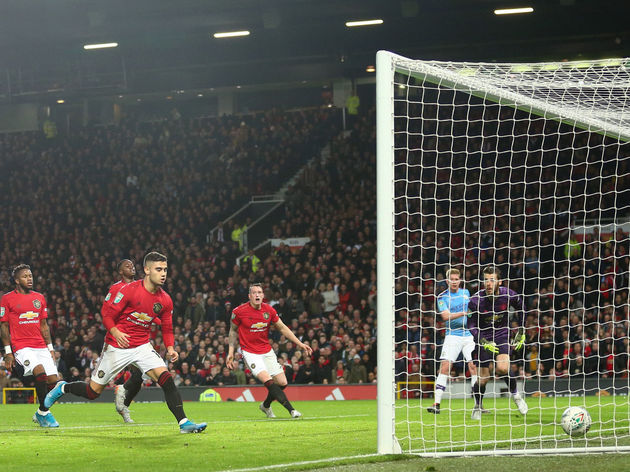 Mahrez was denied his second of the match by the outside of the post just after the break, while at the other end of the pitch Marcus Rashford pulled United back into the match with a clinical finish off the back of a typical counter.

The hosts came close to pulling another back too, but Manchester City were able to hold on for the win and they'll take a two-goal lead back to the Etihad ahead of the second leg of the Carabao Cup semi-final on January 29.

It was a strong start to the match as Daniel James and Marcus Rashford caused City some headaches in the opening few minutes, but the visitors took control of the match after Bernardo Silva's opener. 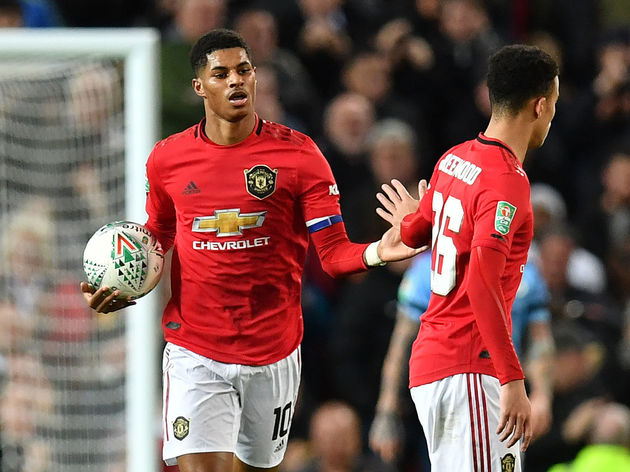 After that, Pep Guardiola's side dominated the match and left United scratching their heads over how to defend against a team who weren't using a recognised striker.

City's first-half blitz was enough to put the game out of sight, although Rashford finished the match on the front foot and looked to single-handedly drag Manchester United back into the match.

He fluffed every chance he had to get on the scoresheet, so it's no surprise that Raheem Sterling was unironically suggested to be Manchester United's best player against City on Tuesday.

It really was slim picking to find United's standout performer, and while it wasn't his best performance for the club, left-back Brandon Williams showed exactly why he should be ahead of Luke Shaw on a consistent basis in the north-west.

This Brandon Williams is the only spark in ghis game

Feel sorry for Brandon Williams tonight, a lot of threat has come down the right and it’s not been through him defending badly but from absolutely zero cover in front of him. #mufc #ManUtd

The 19-year-old struggled at times to deal with City's fluidity, but the visitors enjoyed all their best moments from a more central position and were largely forced into those positions thanks to Williams ability on the left.

Pep Guardiola made the brave decision to start without a recognised striker on the pitch and it seemed to work until Manchester City approached United's final third, where the visitors' attacking players unsurprisingly looked for passes rather than shots throughout the opening 15 minutes. 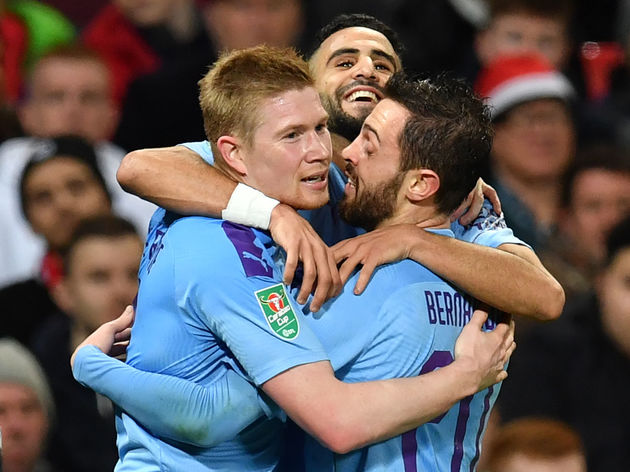 When Bernardo Silva became City's first player to try their luck with an effort on goal, Guardiola's side found themselves take the lead at Old Trafford courtesy of a stunning long-range shot from the Portugal international.

After they'd settled down, City's decision to play without playing with a recognised striker - a tactic that Guardiola has previously used at Barcelona - worked perfectly as United's players didn't know who to pick up and that offered the reigning Premier League champions more space in dangerous areas.

The expression we all made! 

Stonker of a goal from Bernardo Silva. Delightful footballer.

A strike of absolute class from Bernardo Silva... what a player!

Bernardo Silva has scored more goals in his last two games at Old Trafford than Jesse Lingard has managed in his last two seasons.
That is one crazy stat.  #CarabaoCup #MUNMCI

Ole Gunnar Solskjaer's will be staying at Old Trafford this weekend when they host Daniel Farke's Norwich City, while their FA Cup replay against Wolves is also just around the corner.

For Manchester City, they're travelling to face Aston Villa on Sunday.