Defending Premier League champions ​Manchester City slipped to eight points behind leaders Liverpool on Sunday afternoon, as Pep Guardiola's side suffered a shock 2-0 defeat to a stubborn and determined Wolverhampton Wanderers side at the Etihad Stadium.

Despite surrendering most of the possession, Wolves had the better of the chances in the first-half, as Man City gifted the visitors three gilt-edged chances, only for strikers Raul Jimenez and Patrick Cutrone to fluff their lines. Raheem Sterling created the best opening for the home side in the first 45 minutes, but Rui Patricio saved smartly from distance.

The Citizens pushed for a winner as the game continued, but they were frustrated as they struggled to break down Nuno Espirito Santo's men, and they were made to pay when Adama Traore finally finished off a counter-attack led by Jimenez.

As a stunned City toiled for the equaliser,

After dropping points against Norwich and Tottenham, Guardiola's men themselves found themselves eight points behind leaders ​Liverpool, and in desperate need of a win to keep the pressure on the Merseyside club. Sunday's game did not go to plan. 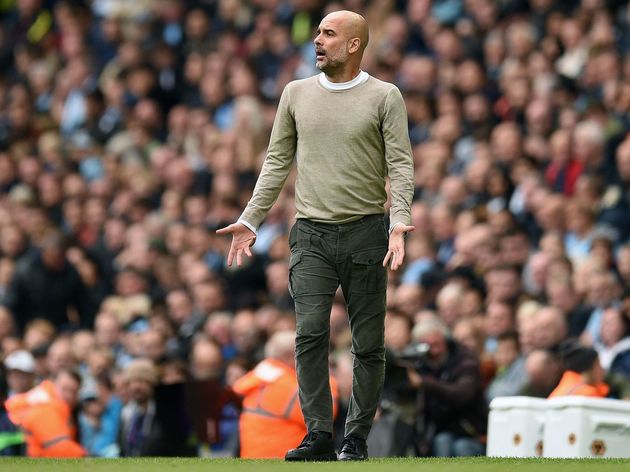 The ​Man City boss must have been lost for words during the opening 45 minutes, in which old defensive frailties were present once again as the hosts presented Wolves with three unbelievable goalscoring opportunities, which the travelling side squandered.

The Citizens' passing was incredibly sloppy, and they gifted possession to Wolves countless times, ultimately costing them the match as the barn-storming Traore profited late in the second half.

A 2-0 defeat, eight points behind Liverpool and a

STAR MAN - Despite City's aforementioned lapses of concentration at the back, one man came out of the game with some grace. ​Fernandinho, playing out of position in his lesser-known role as a centre-back, saved his teammates on numerous occasions as they continued to reach out for the self-destruct button.

34 year old Fernandinho is our best defender. Without him Wolves are winning this 2-0.

The Brazilian midfielder stopped Raul Jimenez from breaking the deadlock on two separate occasions when the Portuguese hitman seemed destined to score. Fernandinho put his body on the one and blocked everything in his path, and was an incredible brick wall in front of Ederson.

In the end, it wasn't enough, but n

This Wolves high line, and the pressure they're putting on the ball, is leading to these problems for City. They haven't got the options on the ball that they usually have, and less time to think too

#ManCity uncharacteristically sloppy so far - plenty of errors in possession. #Wolves have failed to capitalise and surely the hosts’ charitable mood won’t last much longer.

There's only one moment we can look back on isn't there. With Wolves penned in, Jimenez spotted a loose ball and, head down, charged with all his might towards the Man City goal. Nicolas Otamendi put in a limp tackle, and the Mexican forward wriggled free before squaring the ball to Traore.

MAGNIFICENT from Raul Jimenez, Wolves two on two, he saunters past his man and slips in Adama Traore who picks his spot to score for the first time in 45 games in front of a disbelieving and utterly ecstatic away end CAN YOU BELIEVE THIS

 Four years after Liverpool turned down a move for Adama Traore he's put them eight points clear of Man City at the top of the Premier League... pic.twitter.com/xC2klpKCpq

Traore, with the weight of Wolverhampton (and Liverpool) on his shoulders, collected the ball, took a deep breath and slotted past Ederson to send the away end into absolute pandemonium. A devastating blow for Guardiola's title hopes, but an incredible moment for Wolves and their travelling fans.

STAR MAN - If Fernandinho was a brick wall for Man City, then how can we describe WIlly Boly? The man-mountain threw his body in the path of every ball, won every header, dived into every tackle etc etc. Basically, he was absolutely monstrous. ​Wolves struggled defensively during the opening weeks of the season, and it's no coincidence that they look much more settled in the more comfortable system of a three-man defence.

Boly is the key to holding this defence together, and their sensational rearguard performance will calm the nerves of Wolves supporters following their shaky Premier League start.

Wolves are seriously scrapping to try and get something from this game. Committed and resilient defending. Given they hadn't even started playing in Istanbul 72 hours ago, it's been a phenomenal effort so far.

Guardiola will be desperate to keep the pressure on league leaders Liverpool, when Man City travel to Selhurst Park to take on ​Crystal Palace in two weeks time.

Wolves will be elated with their brilliant victory at the Etihad Stadium, and the Midlands club has a great opportunity to pick up another three points when they host ​Southampton after the international break.