​Manchester City advanced to the EFL Cup semi finals with a penalty shoot-out win over Leicester City at the King Power Stadium, following a 1-1 result in normal time.

On his return to the starting lineup, it was Kevin De Bruyne's wondrous first half score that separated the sides for much of the night. However, shortly after the Belgian's departure from the pitch, the Foxes capitalised with an equally emphatic finish from Marc Albrighton. 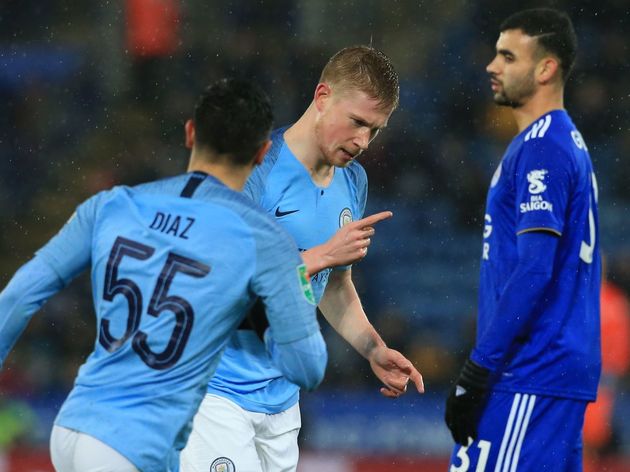 Penalties were duly required, and, amidst a torrent of tame to blazed efforts, in the end Arijanet Muric's 6ft5' frame told, with two saves to send the Citizens through with a 3-1 victory.

KEY TALKING POINT - Before kick off, Leicester fans were understandably frustrated with Claude Puel's significant personnel changes. With their ​Premier League status surely secure, the fans were perplexed, and not for the first time, that the Frenchman had put out an inexperienced XI in the cup.

However, Puel was redeemed with Albrighton's sumptuous half-volley that levelled the proceedings in the 73rd minute, and the general impact that all his subs had in the second half, exploiting some naivety in the City defence. Ultimately it wasn't enough, with Fuchs, Maddison and Soyuncu the poor-penalty culprits, but at least Puel's side could hold their heads high at the final whistle.

The #LCFC fans have just cheered a huge Choudhury tackle like it was a goal. A new fans' favourite?

STAR MAN - It was a wonderfully hit finish from Marc Albrighton, and the winger, along with fellow sub James Maddison, evidently gave their side some much needed impetus. But I'm going to pick out Hamza Choudhury, because the youngster was magnificent throughout. Even when he made a sloppy touch on the edge of his box to hand City a great chance, he made up for it with an astonishing goal-saving challenge. At 21, this wasn't the first time we've seen Choudhury excel, but it certainly won't be the last.

WORST PLAYER - None of the back four covered themselves in glory, with Choudhury frequently required to fill in for defensive vacancies, but I'll go for Caglar Soyuncu.

It’s becoming quite transparent why Soyuncu had taken so long to get first team appearances. Feels like a younger kamikaze Benalouane. Fortunately has time on his side #lcfc

Not only was his penalty unduly easy for Muric to save, but time and again he gave his side and their supporters cause for concern, with his lack of gametime evident in his general composure.

KEY TALKING POINT - The Kevin De Bruyne appreciation section is coming up, so let's use this time to focus on something else. Like John Stones. If Manchester City have one problem going forward, it's in that Fernandinho position.

The 33-year-old remains utterly integral in that deep-lying role, with seemingly no viable understudies. Here, Guardiola tried Stones in the role, and though he was perfectly assured, it did not feel like a long-term fit. If the Brazilian was to get injured, this could become stark for the Spaniard. He will also be displeased with much of his fringe players - ​Phil Foden aside - but at least their quadruple charge remains on the cards.

STAR MAN - Who else but ​KDB. In just his third start of the season, and first since November, the Belgian opened the encounter with a goal perfectly designed to be consumed thousands of times over in GIF format.

He collected the ball on the edge of the area, produced a mesmerically bamboozling chop-back skill before thrashing it into the net from range, with his characteristically precise striking technique ensuring the EFL insignia on the ball remained very much visible throughout its flight.

How good is it to have him back?! pic.twitter.com/baMyiN2Buz

And that was just the goal. He was influential on both sides of the pitch, and it was no coincidence that ​Leicester's equaliser came three minutes after his removal. Indeed, he would've had an assist or two were it not for Brahim Diaz's finishing woes.

He's back. Beware those in Red.

WORST PLAYER - He definitely wasn't the worst player overall, but ​Serio Aguero may well be the player to feel the most ramifications from this game. With Gabriel Jesus getting back in the goals on Saturday, Aguero's profligacy could mean more time on the bench this Christmas. He wasn't his usual self, but Oleksandr Zinchenko was, to devastating effect. The Ukrainian is simply not a left back, and showed this time and again with inept marking and tracking.

And once again, proof that Zinchenko is not an LB.

Diaz was also sloppy up front, but Zinchenko's impact was tangibly worse, and his deciding penalty didn't alter this fact.

With their name now firmly in place for the semi final draw, alongside Nigel Clough's Burton, Man City will host Crystal Palace on Saturday in the Premier League, before they return to the King Power for their Boxing Day matchup.

As for Leicester, they'll prepare for that festive rematch with a clash against Chelsea at Stamford Bridge on Saturday.