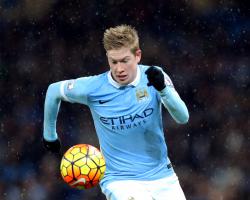 The Belgian playmaker - signed for a club record ÃÂ£54million last summer - suffered knee ligament damage and a sprained ankle in the Capital One Cup semi-final win over Everton on January 27.

De Bruyne has already scored 12 goals in an impressive start to his City career and he expects to be back in action for the run-in.

The 24-year-old told the club's website, www.mcfc.co.uk: "I hope to be back training with the squad in five weeks, after the international break at the end of March.

"Everything's going according to plan

Now the brace is off, the real work is about to begin."