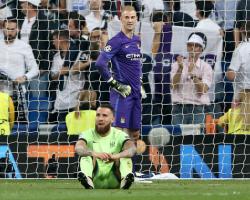 City's bid to reach the final ended in semi-final disappointment as they were beaten 1-0 by 10-times winners Real Madrid at a fevered Bernabeu Stadium on Wednesday.

Having come so far, goalkeeper Hart is hungry for more and attention must quickly switch to the battle for a top-four place in the Barclays Premier League.

Fourth-placed City are being challenged for their Champions League spot by Manchester United and West Ham and they now face a crucial game at home to third-placed Arsenal on Sunday.

"I'm looking forward to it

We go again to cement our place in the Champions League.

"It is important for the club and for me personally

Nights like Wednesday are amazing and I want to keep them coming."

A campaign in the Europa League - in which City are at least guaranteed entry following their Capital One Cup success - was not the plan when they signed up Pep Guardiola as their next manager.

Hart said: "There is not a lot we can take from this night but in the Champions League this year we have grown and shown some good moments

We are going to have to take that into next year.

But we didn't and we are out."

In the final reckoning, an own goal from Fernando after 20 minutes of the second leg - deflecting Gareth Bale's effort - proved the only difference between the sides over the two matches.

City boss Manuel Pellegrini claimed neither side deserved to progress but it was hard to deny Real were not the better team.

They had 15 compared to City's four and Hart - again impressing, as he did in the first leg - kept many of them out.

City may rue a missed opportunity but Pellegrini, who now only has two games left as City manager before making way for Guardiola, hopes the experience proves invaluable for the club.

He said: "Maybe we are not happy now but it has been a special season because we reached the semi-final and that was important for our team.

For the Champions League it is a step more and I think this team must always try to play that final in the next years."

City could be without captain Vincent Kompany for those final two games against Arsenal and Swansea after he suffered a groin injury early on at the Bernabeu.

Kompany limped off after just 10 minutes with the latest problem in an injury-plagued season and was due to be assessed on return to Manchester.