Joe Hart determined to build on hard-fought win at Watford 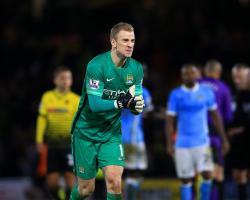 Despite their unquestionable talent, third-placed City have remained inconsistent and entering the final 10 minutes of Saturday's fixture were on course to record another defeat.

Yaya Toure and Sergio Aguero produced late finishes to overcome Aleksandar Kolarov's earlier own goal, however, and Hart has demanded City push on.

"We've got to build on this now," the England goalkeeper told City's official club website.

"This result can only be good for us because it ends a run of six Premier League games in a row without a win, which isn't title-winning form but we've somehow managed to stay in the hunt.

"We've still got all the clubs who are around us to come to the Etihad and I think we're in a good place.

"We've got a big cup game (at Everton on Wednesday in the Capital One Cup semi-final) to come now this week and even though we're not where we want to be, we're close and this was a big result for us.

"We were one down and not particularly going anywhere

It was a terrible goal to concede but we hung in there with a great goal from Yaya, and Kun's (Aguero) header was evidence of the type of player we know he is."

Despite defeat, Watford continue to impress in their pursuit of European football in a season many expected would end in relegation.

They largely outplayed City until Toure and Aguero's goals and winger Jose Manuel Jurado, whose creativity and touch particularly impressed, revealed the encouragement he has taken from their recent performances against Tottenham and City.

"The positive thing is that we are a very competitive team," he told Watfordfc.com

"We have shown that we can compete against teams like Manchester City, but unfortunately this is football and this is the way it went.

"These are big teams that have an incredible amount of quality, and when they are in front of the goal they will score.

"We knew we had very some difficult games and in my opinion we have been competing at a very high level, but with a little bit more luck next time we will get some extra points.

We are already thinking about the next games and how we can win them."