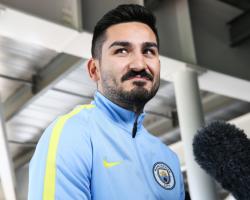 The Germany international, 25, signed for City from Borussia Dortmund last month despite a knee injury that will keep him sidelined for the opening weeks of the new Barclays Premier League season.

That did not prevent Guardiola from making Gundogan his first signing at City, though, and the midfielder revealed he was informed by his new manager that he sees him as pivotal for his vision at the club.

"He told me that he needs a player like me as a central midfielder," Gundogan revealed.

"We haven't had the possibility to talk more

He comes now, we will think about it more then we will see.

"I like to have the ball, to have the possession and to play passes, to create chances for my team-mates

I think that is what makes me strong

I hope those are things that we need here."

Gundogan has not featured since April due to a knee injury he suffered while still at Borussia Dortmund and it was that problem that prevented him linking up with his Germany colleagues at Euro 2016 this summer.

City have three league games in August and their first fixture in September after the international break is at Old Trafford against cross-city rivals Manchester United, whom Gundagon was constantly linked with while still at Dortmund.

"I hope to be ready as soon as possible, I am looking forward," he said of a comeback date.

I am happy right now at the moment and just being positive."