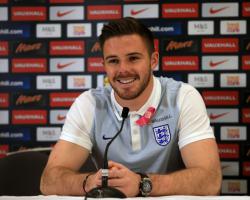 Neuer, 29, is widely regarded as the best goalkeeper in the world, having been named in FIFA's FIFPro Team of the Year on every occasion since 2013.

With three Bundesliga titles, as well as a World Cup and Champions League medal in his collection, Neuer also finished third in the 2014 Ballon d'Or - only losing out to Cristiano Ronaldo and Lionel Messi.

He is Germany's undoubted first choice despite Joachim Low having a strong list to choose from, with Barcelona's Marc-Andre ter Stegen and Kevin Trapp of Paris St Germain also highly thought of.

Usually, his opposite number when facing England would be Manchester City's Hart, but he suffered a calf injury in Sunday's derby defeat to Manchester United.

That leaves the door open for the likes of Butland, and a fit-again Fraser Forster, to stake their claim for a place in Roy Hodgson's side for the European Championships with strong performances in the game in Germany, and then Tuesday's Wembley clash with Holland.

And Stoke's Butland, who spent time as Hart's club team-mate when the pair crossed paths at Birmingham, believes England's current first choice is just as good as the likes of Neuer.

"He's right up there and he is one of the best in the world," Butland said when asked where Hart ranked

"Whether it is watching on TV, training with him with England or back when he was at Birmingham, there are always things to learn.

"Joe got injured this week, so you never know

I don't prepare to sit on the bench, I prepare to play because you never know what is going to happen.

"I spoke to him and obviously wished him well

I was kind of hoping I was bridging the gap anyway, but now he is not here, it is a little bit different.

"But you never wish to see somebody injured

I saw the game live, but you get people texting you and it is not like that really.

"It's not nice to see a fellow player, and somebody I have known for a long time and get on well with, be injured.

That's an environment we thrive in and hopefully it can enable us to close the gap on Joe."

Butland, so impressive for Mark Hughes' Potters this season, is a keen student of the art of goalkeeping and understands why Neuer is held in such high regard.

"People have put him up there (as the best) in the last five or six years just because of the way he plays," he said.

But it's not for everyone.

But I do that with many others too.

At Stoke we've looked at many keepers Claudio Bravo, Keylor Navas, looking at their distribution and how they make it work.

You ask 'What is he doing right and how can it improve my game?' and it's certainly something I've been doing."