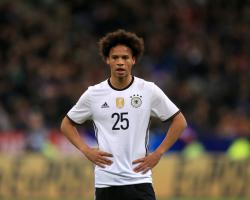 SanÃÂ¨, 20, is valued at ÃÂ£40 million by the German club and is also being courted my Manchester City

This campaign he has made 19 appearances, finding the net five times, four of which have come in the Bundesliga