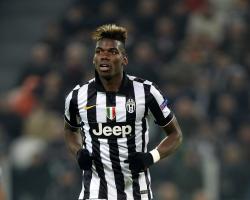 We are of course talking about Paul Pogba and the historic transfer and riches that could await him once more in Manchester.

The numbers look immense but so too is the talent with a ÃÂ£70million transfer fee on offer for Juventus and a cool ÃÂ£250,000-per-week (after tax) wages for Pogba if the reports are to be believed.

The capture of Pogba would be an incredible coup and surely herald the beginning of a transition for the former Premier League champions.

Pogba returned from almost two months out with a torn hamstring at the weekend with a goal and could well feature in the crucial Champions League fixture against Real Madrid where they have a slight advantage going into the away leg on Wednesday.