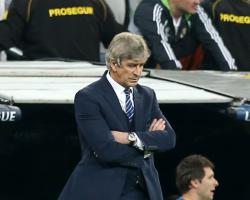 Pellegrini has rejected suggestions he was prepared to risk a top-four place in the Barclays Premier League to pursue this season's Champions League challenge.

That ended in semi-final loss to Real Madrid in midweek and, as Pellegrini is being replaced by Pep Guardiola in the summer, whether they compete in Europe's top competition next season is of no personal consequence.

But, as fourth-placed City prepare for a vital game against Arsenal this weekend, Pellegrini says it is wrong to suggest he lacks motivation for Premier League games.

The Chilean said: "I think it is very, very important to arrive to the Champions League next year

I finish my contract here but that is not a thing I am worried about.

"With continuing in the Champions League to the semi-finals, it is not easy to have your mind on both competitions but I think we did it, except in the game against Southampton

All the other games we won.

"If I was just worried about the Champions League I would change for all the games every important player.

"Except for the last game, because it was so important to arrive to the final and I made some changes, we put out a strong team

The last five games we won four and lost just one.

"It is very important for me also, so I don't understand those kind of speculations about that."

City's failure to mount a serious challenge for the Premier League title and the manner of their defeat at the Bernabeu - where a 1-0 scoreline flattered Pellegrini's men - has left a negative impression on the season.

But while Pellegrini admits expectations were higher, he thinks the campaign should be looked on positively.

He said: "You always feel that you can do it better, especially for me

I am disappointed not to win the Premier League this year because until February we were in our best moment to do it.

We reached the semi-finals of the Champions League; we couldn't continue in the FA Cup.

"It is a season I think you can improve on, but it was not a bad season."

Pellegrini, who was appointed in 2013, now has just two games left in charge of City and Sunday's clash with Arsenal will be his last at the Etihad Stadium.

He said: "Of course it is a very a special game because we finish at home after very intensive years.

"But as a manager you must try to dominate your emotions

Of course I have feelings but don't want to show them in an external way."